GODS OF EDEN, THE HISTORY OF HUMAN ORIGIN 3 CDs TRANSLATED TO SPANISH 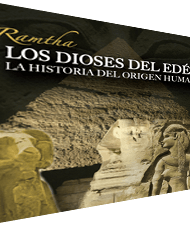 “455,000 years ago came an extraordinary group of explorers and they were called the Gods of Eden for the stories of the Eden came from them as legend and indeed metaphor. 455,000 ago a great ship docked on Mars, it’s what you call it. It was their home base and the group that came to Terra Firma, the name of the Earth in the days that I knew was called Terra, not Gaia. It was troubled, dark and lost. And 455,000 years ago this extraordinary civilization occupied the most advanced planet in this solar system. They came here and they were mining the world for gold because gold is the alchemist’s dream, it is the metal that never deteriorates, never rusts and its components are absolutely important for creating shields and so if gold can be created and mined into dust and sprinkled in an atmosphere that the inhabitants would look up in their atmosphere, that they would see their central sun playing off of gold dust. They lived in an enchanted world but the gold absolutely propelled away from them the pollution and qualified life in their planet. This is all a true story. And you will live long enough to hear its verification. They were here and they settled in Africa, their most technological group settled in Africa, their most astute group, the royal houses of this particular family settled in the crescent valley of the Mediterranean. And in the crescent valley, the most prominent and loving God towards your generation set up his house in the swamps of Babylon, if you can imagine that the deserts of Iraq were once a swamp for indeed they were. And he set them up there and all of his associates were around the world in every country including Mexico. There is the legend of the great Gods who came down wearing beards, white as snow.”